This online educators retreat is open to any teacher or administrator, chid care taker and anyone involved in the ecosystem of education.
It will be in English with translation in German (when needed) and online.
It is open to those who are new in the Plum Village / Wake Up Schools tradition and for those who already have some experience.
Please contact the European Institute of Engaged Buddhism for details.
This retreat will be co-led by Tineke Spruytenburg and Miles Dunmore. 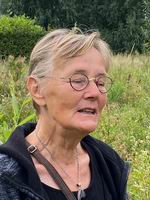 Tineke Spruytenburg graduated in Pedagogical sciences. After an academic career she became a qualified teacher at the age of 48. She worked in basic and special education.
She has been a member of the Order of Interbeing since 2006 and lived in Plum Village for two years. In 2007 she visited Vietnam with Thay and the four-fold Sangha.
She organized and facilitated family retreats, supported many children’s programs, and co-facilitated (international) retreats for teachers in The Netherlands and E.I.A.B.
Since June 2018 she is a Dharma Teacher in the Plum Village tradition.

Miles Dunmore teaches English at the American School in London. A lay practitioner in the Plum Village tradition, Miles travels each year with students and colleagues from ASL to practice at Plum Village. He has assisted in running and facilitating educators retreats at locations including Plum Village, London, the West of England, and in Spain.

"I became an educator full of idealism. I care about my students. I know that to keep my true aspiration alive I have to take care of myself first, and then I can help my students.”